Created by head writers, Margaret DePriest, Sheri Anderson and Thom Racina, Eric is the only son of supercouple, Roman Brady and Marlena Evans. Introduced onscreen by Betty Corday and Al Rabin in 1984 along with his twin sister, Sami Brady, the twins are rapidly aged, and Jensen Ackles stepped into the role of the teenage Eric in 1997. Eric's saintly behavior immediately sets him up as the better half to his very troubled sister Sami. Eric falls in love with Nicole Walker; however the relationship ends in heart break which leads to Eric's departure.

In 2012, Greg Vaughan stepped into the role and the character is re-introduced as a priest. He also reconnects with a now reformed Nicole and even works with his mother's longtime rival Kristen DiMera to help establish a new school in Salem. The dynamic leads to a constant struggle between Eric and Nicole, as both still seem to have strong feelings for each another.

Jensen Ackles auditioned for the role of Eric several times before was actually hired. The extensive process led to him rethinking his budding career as an actor. Ackles stepped into the role of Eric on a contractual basis on July 28, 1997. In the summer of 2000, during an interview Soap Opera Digest, Ackles confirmed that he would soon exit from the series after obtaining a development deal with ABC. Ackles made his last appearance on July 31, 2000. However, Ackles admitted that he could return. In December 2000, it was reported that NBC had approached Ackles to reprise the role in early 2001, but he respectfully declined. Reports also surfaced that the producers considered actor Shane McDermott, who was previously known for his portrayal of Scott Chandler on ABC's All My Children to take over the role, but executive producer Ken Corday immediately shot down the rumors, revealing that there were no plans to recast the role.

In February 2011, Greg Vaughan, who was previously known for his roles as General Hospital's Lucky Spencer and The Young and the Restless Diego Guittierez had turned down a testing deal with Days. It was then announced that Vaughan would star alongside Alison Sweeney, who portrayed Eric's twin sister, Sami Brady in the Hallmark movie, Second Chances, which fueled rumors that the series was interested in Vaughan for the role of Eric. In late June 2012, TV Guide's Nelson Branco confirmed in his publication, Soap Opera Uncensored that several sources has revealed Vaughan had signed on as Eric Brady, despite no confirmation from NBC. In early July, Soaps In Depth confirmed that Vaughan was set to join the cast, but his role had yet to be confirmed, with some speculating that Vaughan could be playing an entirely different other than Eric. The July 16 issue of Soap Opera Digest reported that several sources had Vaughan in the role of Eric, but NBC had yet to confirm Vaughan's role. The magazine hinted that Eric would return as a "very changed man." On August 8, 2012, Soap Opera Digest confirmed that Vaughan had officially began taping in his role as Eric Brady and was slated to first air in November 2012. Vaughan's first air date was later confirmed as November 13, 2012. Vaughan revealed that when he initially auditioned for the role of Eric, he was rejected. However, he was happy that he earned the job instead of having it handed to him.

In August 2015, Vaughan extended his contract with the show for an unspecified amount of time. However in November 2015, it was announced that Vaughan will be departing from the show.

On July 22, 2020, in an episode of their podcast series with Steve Burton (Jason Morgan, GH) and Bradford Anderson (Damian Spinelli, GH), Vaughan revealed he was taking a break from the show.[1]

Eric Brady was one of twins born to Roman and Marlena Brady. He and his sister were extremely close as children, and were sent together to Colorado shortly after starting school. Although Sami returned to Salem during high-school, Eric was well out of school by the time he finally came home, when John and Marlena became officially involved because Eric believed that his parents (Roman and Marlena) belonged together. He also believed that his amnesiac sister Sami was faking her memory loss. With Carrie and Mike, Eric tried to find out what Sami's big secret was, and on the day that Sami was set to marry Austin, they realized that Will could not possibly be Austin's son, and that Sami knew. Carrie rushed to the Church to stop the wedding and to humiliate her sister. Although Eric felt horribly guilty for the role he had played in his sister's pain, Sami soon forgave him, because she realized he didn't do it to hurt her. Not long after, Eric realized that someone was following him everywhere. It turned out to be an old schoolmate, Jed Fox. Eric had initially been accused of date rape when Jed was really the rapist, and lost his position in school as a result. Jed threatened to kill Sami if Eric didn't say it was really him, but Eric was able to convince Jed to accept his crimes and move on. Shortly thereafter, he met Nicole Walker, a waitress at the Java Café. When he started working at Countess Wilhelmina as a photographer, he thought she would make the perfect model. The two became romantically entangled, although their relationship was strained when Nicole's past started cropping up. When Eric had to focus all his attentions on Sami's upcoming trial for murdering Franco Kelly, Nicole got involved with Lucas, and Eric got involved with an older woman, Greta Von Amberg. Nicole and Eric were finished when Eric learned that Nicole had married Lucas Roberts. Eric was then free to focus all of his concerns on Sami's trial. Sami had escaped and gone on the run, but after being recaptured by the police, she was sent back to prison to await lethal injection. Just as the injections were being given (as a shocked Eric looked on), Lucas burst in to take the blame, but later recanted when Roberto Barelli also confessed. Although Greta and Eric were spending a lot of time together, he couldn't keep Nicole out of his mind. He began sleeping with her again, and when Greta realized Eric still loved her, she broke things off. After having a near-fatal accident at a railway crossing and a heavenly trial with Isabella Toscano Black as his counsel, Eric decided to leave Salem. Before he left though, he told Nicole he would always love her. Since leaving, Eric sent a letter to town when Roman was presumed dead (Roman was later found alive) remembering some of the good times. Marlena and Sami also made several trips to Colorado to visit Eric. 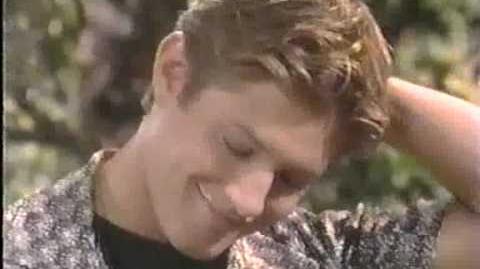 Jensen Ackles...Eric and Greta at picnic...soooo cute!!!
Retrieved from "https://daysofourlives.fandom.com/wiki/Eric_Brady?oldid=59667"
Community content is available under CC-BY-SA unless otherwise noted.